Skip to main navigation Skip to content Skip to footer
by kmichaelis•Posted June 10, 2017 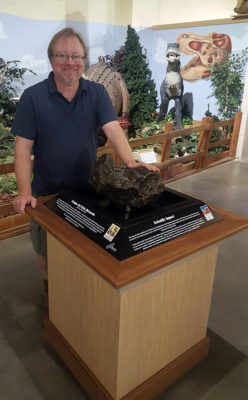 There is a new touchable exhibit at Dinosaur Journey: a 119-lb. iron-nickel meteorite from Argentina. One of many fragments of a much larger meteorite, this piece was collected from Campo del Cielo (Spanish for “Field of the Sky”) in northern Argentina. The original meteorite fell to earth about 4,500 years ago and is estimated, based on the size and number of fragments, to have been 12 feet wide and weighed 800 tons.

This meteorite was donated to the Museums of Western Colorado’s Dinosaur Journey by the Toomey Foundation for Natural Sciences and the display was funded by the Asterion Foundation. We were selected to receive this amazing exhibit based on our mid-market museum size, as well as our established success of engaging the public through interactive displays like this touchable exhibit. Mr. Michael Toomey (pictured here with the meteorite) was impressed with the Dinosaur Journey Museum’s interactive exhibits during a visit in 2016, especially the asteroid impact display that was part of the Tyrannosaurus rex and the End of the “Age of Dinosaurs” summer exhibition. After meeting with the curator of paleontology and discussing the importance of meteor impacts during the reign of dinosaurs and appropriateness of having a larger, permanent display at the museum, Mr. Toomey agreed to recommend us for the donation of the meteorite, which is now on display.

We are excited to host this new, permanent exhibit at Dinosaur Journey and how you will take the opportunity to touch this rock from space on your next visit. You can find the Campo del Cielo meteorite in the Cretaceous gallery, near the Triceratops skull.