Skip to main navigation Skip to content Skip to footer
by kmichaelis•Posted December 26, 2016

New Discovery About the Use of Flint in

Director of the Western Investigations Team/Curator of History

It has been assumed by historians and archaeologists that wheellock pistols used in the New World by Spanish Colonial adventurers and explorers used pyrite, not a flint ignition system. The earliest wheellock pistols were invented in the early 1500s. The pistols had a spring-loaded wheel mechanism that was wound up and then an arm (doghead) holding the pyrite was set down on the wheel. Once the geared wheel was released against the pyrite it would create sparks that ignited the gunpowder in the barrel and fired the projectile. 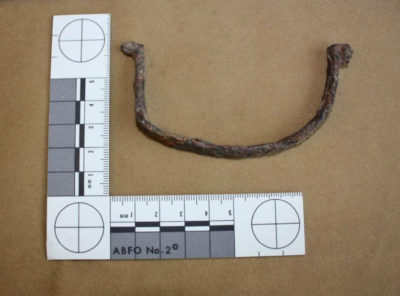 The Western Investigations Team excavation of the Redoubt Site, a small fort-like structure near Kannah Creek, Colorado, and a nearby stone wall revealed numerous fragments of Spanish Colonial armor and fragments of an early wheellock pistol that included a trigger guard (left).

One of the most interesting pieces discovered was an ornate twisted filial doghead screw that was used to hold pyrite in place to ready it for contact with the wheel mechanism. I researched the different

designs used on doghead screws from the earliest artistic designs in the 1500s to the later, more utilitarian, models in the 1600s. I found the early Spanish wheellock histories documented the use of twisted filial doghead screws to the 1590s (right) and the screw we recovered at the Redoubt Site was very similar in design.

The other interesting reference was that early wheellocks of this design did not use pyrite as their ignition system but instead used flint. These early wheellock weapons were known in Spanish as “Llave de Pedernal” or “Key of Flint” and used an unusual fan-shaped flint to create friction on the wheel mechanism. Even more intriguing was that the Western Investigations Team had found honey-

colored, fan-shaped flints at the Redoubt Site as well as at the nearby stone wall (right).

I conducted further research at Spanish Colonial archaeological sites across the United States and found similar flints to the ones we discovered at the Redoubt Site and the stone wall. These honey-colored flints had the same fan shape and flat edge at the bottom. They are often referred to by archaeologists as spall-type gunflints, meaning they were made from nearby sources and not imported from European flint suppliers. However, my new research indicates that these so-called spall flints could have been the type specifically made for early Spanish flint wheellocks and may change the interpretation of many historical sites across the country.

What does this mean for the Redoubt Site? The site has been interpreted by some archaeologists as a collection point of discarded Spanish Colonial metal taken there by the Utes for trading purposes. But what would the fan-shaped flints used by a 1590s wheellock pistol, as indicated by the filial design of the doghead screw, be doing there unless the gun had been originally intact with the proper flints used for firing it? Could there have been a post-Coronado Spanish Colonial expedition to western Colorado? Extensive research is needed to answer these questions and I will keep you posted on the Western Investigations Team’s new discoveries and their subsequent results from the Redoubt Site.