Skip to main navigation Skip to content Skip to footer
by kmichaelis•Posted June 22, 2016

For the first time since the 1983 CAS (Colorado Archaeological Society) excavation of the bunkhouse, archaeological work is currently underway at Cross Orchards. With the help of CMU’s Assistant Professor of Archaeology, John Seebach, Ph.D., and his students, surveys are being done on two very intriguing areas on the site. 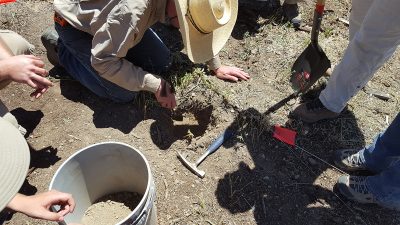 The first part of the project was to investigate a mysterious structure on the far western side of the property. Historic aerial photographs of Cross Orchards revealed there was once a building on the property that no longer exists. Documentation that might help to identify the purpose of the building has been difficult to locate. Therefore, it was decided that archaeology was our best bet to get to the bottom of this mystery.

During the course of the week the students, eager to discover the building’s foundation, dug a series of test pits along a set path. After a day and a half of hard work the results were less than ideal. The students had to fight for every centimeter in this incredibly tough, rocky soil, and, unfortunately, very few specimens emerged. However, after returning to the historic photographs it was determined that the field school was just a few feet south of where the building once stood. With this information in mind the students began setting a new datum point with a series of shovel tests. This strategy paid off! Soon fragments of broken glass, rusty nails, large chunks of asphalt, and metal began to emerge at a rapid pace.

What these specimens have to tell us about the nature of this mystery building is still unknown at this time, but it appears the students are on the right track. Every fragment and artifact found is another clue that will one day reveal new and exciting information about Cross Orchards!

The field school resumed June 20th to fulfill the second half of their mission: investigating the foundation of the old silo.

Check out the article in The Daily Sentinel here.