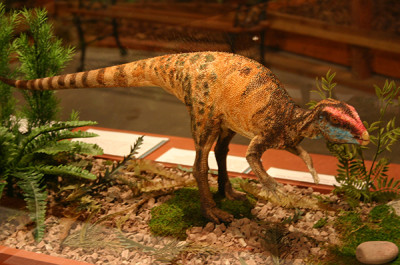 This is a model of a tiny adult dinosaur found in the Morrison Formation just southwest of Fruita. Fruitadens was as small as plant-eating dinosaurs got, weighing only about 1 pound. Only its contemporary from Germany, Compsognathus, a meat-eater, got as small. As such, Fruitadens is tied for the honor of Smallest Dinosaur In The World. Compare this to some sauropod dinosaurs from the same rocks, such as Apatosaurus, which may have weighed as much as 75,000 pounds. 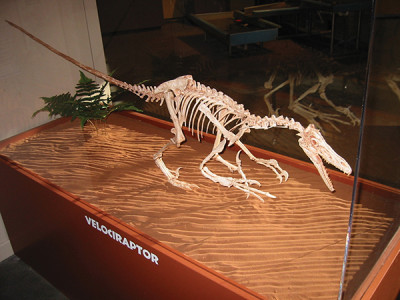 This famous dinosaur from Mongolia was a threat to its prey with its teeth and the claws on both the hands and feet. Velociraptor has been found fossilized in mid-attack, tangled with a Protoceratops and kicking at the ceratopsian with its foot claw. Velociraptor was not particularly large, however. This reconstruction is an adult. 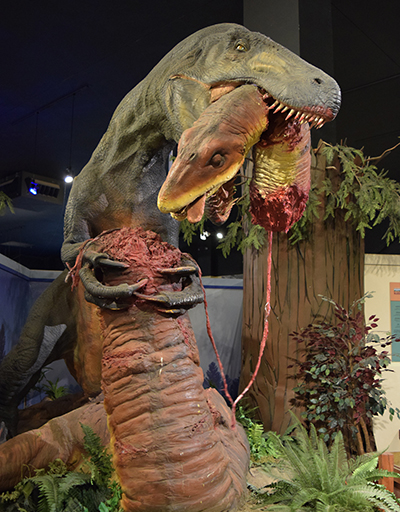 Utahraptor ostrommaysi is a movie star with a case of mistaken identity, known on screen as Velociraptor, it is one of the largest known members of the group Dromaesauridae (“running lizard”), known in pop-culture as the “raptors.” When Utahraptor was discovered in Utah in the early 1990s, it doubled the size of any other raptor known to science, growing up to 25 feet long, 1,500 lbs, with a slashing toe claw that could grow up to 15 inches long! Discovered in the Early Cretaceous Cedar Mountain Formation, Utahraptor is also the oldest known dromaesaur in North America.

Based on evidence gathered at other raptor species, it is inferred that Utahraptor had feathers like Velociraptor, and may have had a metabolism closer to modern birds than reptiles.

As more Utahraptor specimens are excavated, we will develop a fuller picture of what life was like for this remarkable animal that lived in our neighborhood so long ago.