Skip to main navigation Skip to content Skip to footer
by kmichaelis•Posted March 6, 2019

Words from Robert Elliott, Recognized for his Service

I started intermittent volunteering somewhere around 2008, after Beverly (my wife) and I journeyed to Egypt, with a museum sponsored trip led by Mike Perry. We made several new friends one of which, Rosario Gomez of Mexico, helped us repatriate a rare book back to the National Museum in Mexico City. I found a longtime friend, Phil Born, worked here also. Because I had an interest in old guns, David Bailey asked for my input on identifying parts of an old Wheel lock pistol. Maybe he was testing me? He invited me to participate in the Western Investigations Team.

I moved on to photographing some of the collections for computer filing and went onto the gun collection, getting to clean the collection and even help repair an item or 2 under David and Phil’s supervision. From there I ended up in the Loyd Files Research Library working under Michael Menard (who I know we all still miss). We shared many war stories and discovered many treasures in the books and files we were cataloging and sorting. Now Erin has the task of keeping everyone in line. She is much appreciated.

Being exposed to the genealogy folks and Garry Brewer, I joined the Sons of Union Soldiers. Garry shared much of his local history research and a group of us in the library had many lively discussions (sometimes slowing our actual work). The library is a real goldmine of local history, personal accounts, family sagas, boom and bust of many smaller towns and the changing economy of the valley. The many stories of local heroes, bandits, US Presidents, range wars, Rangers and Sheriffs all exposed and recorded thru photos, writings and oral histories.

Railroad histories and Marie Tipping helped get me involved with Cross Orchards and the many wonders to explore there. I enjoyed working on making a photographic inventory of the Corn Collection, the trucks, trackers and construction equipment of times past. 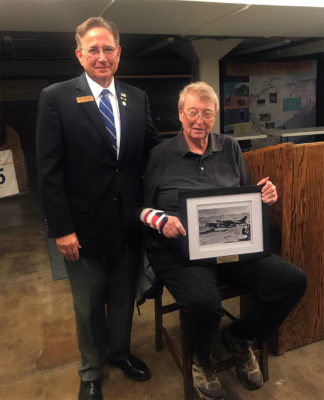 Another of my projects, still unfinished, is a collection of sheet music from pre-Civil War to the 1950s. Many of the songs are lost to time and culture change. Many are no longer appropriate but important because they create a vivid picture of life and culture and how it changes.

I want to thank past director Mike Perry and present director Peter Booth for showcasing my personal work, The Toothpick Airforce, a history of the development of flight from pre-Wright Brothers to the present. The work was developed as a joint educational project between NASA and Dare County, NC schools for the Wright Brothers’ Memorial at Kitty Hawk, NC. Also thank you for inviting me to present my Toothpick Gliders and conduct workshops for kids.

I have enjoyed my volunteer time here and all the friendships I have formed.

I may leave off a name or two but I am not leaving out my thanks. Mary Lou, Cecil, Marie, Frank, Phil, Erin, Clint, Wanda, Vera, Kay, Ed and Lois Gardner, Garry, David, Matt Darling

I know there are others that I am forgetting but thank you all for making this part of life fun.