Skip to main navigation Skip to content Skip to footer
by kmichaelis•Posted June 10, 2019

The Victory Garden at Cross Orchards is a living exhibit that provides a look back into how families supplemented their food during World War II. This is the second season for the garden following a bountiful harvest from last year. Modifications to the garden from last year have resulted in a more diverse range of vegetables for 2019. 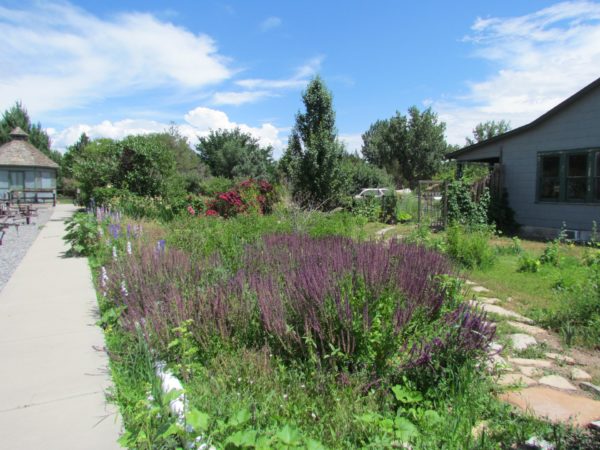 This year spring and cool weather crops have been thriving with our cooler temperatures. Those crops include radishes, chard, sugar snap peas, and cabbage. As the season progresses there will be tomatoes, carrots, beets, turnips, onions, tomatillos, basil, dill, and cucumbers. All of the vegetables are either heritage or heirloom to emulate the same kind of produce grown in victory gardens in the 1940s. Also on display are heritage flowers such as love-lies-bleeding, zinnias, bachelor buttons, four o’clocks, and marigolds.

In addition to the front garden, small pumpkins were planted along the fence between the bunkhouse and 1945 house (previously the caretaker’s house), a pumpkin patch with mammoth sunflowers was planted on the west side of the house, and multicolor popcorn planted with winter squash is in the bed next to the walkway in the north garden.

Fresh small carrots, peas, or cherry tomatoes (depending upon availability) are offered to all who ride the Cross Orchards train on Saturdays. All produce from the garden is harvested and available for sale during the farmer’s market on Wednesday and Saturday mornings. Items that don’t sell those days are often donated to local food banks. Come out and see the garden for yourself.